So I do write reviews for restaurants in Manchester but I tend to put them on YELP which is as good a place as any other. This is my review for 63 Degrees which is rather, as you see left me disappointed:

63 Degrees has a stunning reputation for good fine dining and although the chef can clearly cook, my meal on this occasion was really rather disappointing apart from two of the dishes out of the four I had. Plus it is hard for me not to believe that the service could have been so much better.

I amusingly for me was asked by my companion to dress up for the meal, so entered in full suit, and if you know me you will realise just how unlike me this is. What makes the suit worth mentioning in this case is I really would not mind if I felt the meal was worth the effort of getting dressed up for, but this is not how I felt. 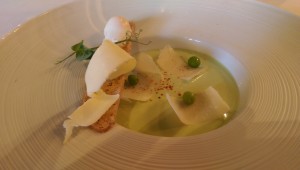 I started with the Pea consommé with organic poached quail egg, which was really rather good although it needs tweaking slightly, if for example they would provide the parmesan in smaller shaved chunks so that you get a little with every mouthful of this glorious consommé it would taste so much better and the balance would be sublime. My second dish was the Risotto with green asparagus and parmesan (no photo) which I have to say is not really worth mentioning, it is very average, plus there are two of my least favourite things on this plate that just don’t belong there, reduced balsamic vinegar and a very cold tomato stuck on the top as a garnish, neither of these two things added anything at all to this dish. 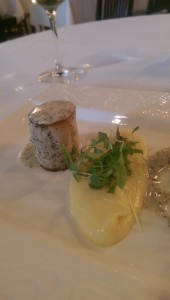 Probably the most annoying thing I had at this restaurant was one of the signature dishes the 63 Degrees Chicken, which was overcooked and dry, the sauce was delicious as was the mashed potato, but considering the star should have been the chicken I was pretty disappointed. I am pretty sure the chicken would have been fairly lovely when it came of the sous vide bath, but trying the add the colour and roasting flavour to it only dried out the meat to the extent, that the whole point of using the chefs signature cooking method became truly pointless. What I am failing to say is that it is clear that the person in the kitchen can clearly cook, however this was not an example of their ability to cook well. 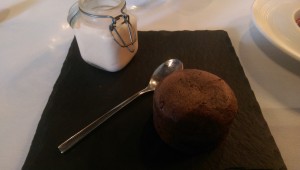 At least I can say it finished well on the food front with a desert of chocolate fondant with sweet strawberry parfait ice cream which was stunning, the right level of sweetness to bitter chocolate and the strawberry parfait provided a clean subtle flavour that contrasted well with the fondant.

Anyone who reads my reviews tends to note that I will mention staff within the review somewhere and although I would normally make a point of mentioning them before the meal eaten on this occasion it is worth talking a bit about staff training. Firstly our waiter should not of been waiting on anyone really, not because they were not perfectly nice, but because he had no idea what we were saying, for example my companion was asking about a dishes preparation and the waiter instead took this to be us ordering it (he did not speak good enough English to understand the question), in the end we had to call over the other English speaking member of the front of house team in order to ask any questions. Secondly this other member of staff had no interest in listening to comments we were making even asking us how we felt about the meal. I think if you are paying for this kind of meal the waiting staff should be informed enough to be able to tell you about the dishes they are serving as well as interested enough to care about what customers make of the dishes.

It does make me think that this restaurant could be doing sublime food but instead it was just disappointing. I hope that if I visit this place again they improve.